Who we are > FENS-Kavli Scholars > CLAIRE WYART 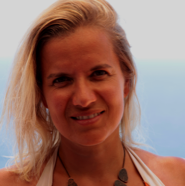 Claire Wyart graduated from Ecole Normale Superieure (ENS) Ulm in Paris, France in 2000. In 2003, she completed a PhD in Neuroscience in the laboratory of biophysics of Didier Chatenay, in the University of Strasbourg. In order to study self-assembling properties and spontaneous activity of neuronal networks, she designed methods to control their architecture in vitro in 2D. From 2005 to 2010, she was a postdoctoral fellow in University of California in Berkeley. In 2005, she worked with Noam Sobel on human olfaction, studying the effects of smelling compounds present in body secretion and not consciously perceived on women physiology. From 2006 until 2010, she joined the lab of Ehud Isacoff to develop chemical optogenetics in vivo. In collaboration with Filippo Del Bene in Herwig Baier’s lab, she implemented approaches to monitor and manipulate neuronal activity in zebrafish larva. She focused her interests on studying sensory motor integration in the spinal cord, identifying novel sensory cells located in the vertebrate spinal cord. Since 2011, she built her own team in the brain and spinal cord institute (ICM), in Paris. Her lab demonstrated that cells in contact with the cerebrospinal fluid carry mechano- and chemo-sensory functions, and upon activation modulate the activity of motor circuits in the spinal cord. The team demonstrated that the sensory pathway they identify in zebrafish is conserved in terms of morphology and molecular markers in mammals, such as mouse and macaques.

University of California in Berkeley, UCB

Claire Wyart’s background is biophysics.  She is keen on developing interdisciplinary approaches to study neuroscience, bringing mathematicians, physicists, computer scientists and biologists to understand how information flows in neuronal networks. During her PhD, she was initially interested in understanding neuronal network dynamics by controlling architecture of circuits in vitro. Then she contributed to the development of chemical optogenetics in vivo. During her postdoc, she identified the zebrafish larva as a great model to remotely monitor and manipulate activity of neurons during behavior. Her lab now investigates how locomotion and posture can be modulated by our inner states. With this goal in mind, she studies the role of the cerebrospinal fluid in the development and function of the spinal cord. Her team discovered the role of a novel sensory pathway detecting cues from the cerebrospinal fluid and modulating the activity of motor circuits controlling locomotion and posture. Located within the hospital campus of Pitié-Salpêtrière, her lab has recruited medical doctors to investigate similar pathways in humans.

During her PhD, Claire spent half a day every other weekends in the science museum Exploradome, inspired by the Exploratorium, teaching science to kids. After her PhD, she spent one year teaching science performing hands-on experiments in Tibetan schools of Nepal and India. With members of her team, she is now explaining basics of development, locomotion and optogenetics using zebrafish larva in primary and middle school.