Who we are > FENS-Kavli Scholars > GREGORY JEFFERIS 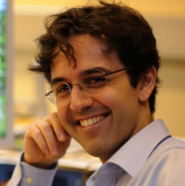 My first taste of science was a year working on C. elegans apoptosis in the laboratory of Michael Hengartner (Cold Spring Harbor). I then read Natural Sciences at Cambridge, specialising in Biochemistry. While there I joined the worm group at the MRC LMB and spent a summer at Caltech with Gilles Laurent. These opportunities strongly influenced my PhD school plans, but I was lucky to arrive at Stanford not so long after my PhD supervisor, Liqun Luo.

During my Neurosciences PhD, I uncovered a number of principles of brain development using the olfactory system of the fly. We found that central neurons in the brain were pre-specified to form connections with specific incoming sensory neurons. Surprisingly, we found that central dendrites could target independently of the incoming sensory axons, suggesting a principle of independent coarse maps refined by contact-mediated matching.

Returning to Cambridge as a Wellcome research fellow, I combined genetic single cell labelling and image registration to build a 3D atlas of higher olfactory centres in the fly, showing that odours of different behavioural significance are spatially segregated.

In 2008 I opened my lab at the MRC LMB in Cambridge. Our work supported by the MRC and ERC has combined anatomical and physiological characterisation of circuits underlying instinctive fly behaviour. We are also well known for tool development and a commitment to open science. I was elected an EMBO YIP in 2012, tenured in 2014 and spent a sabbatical at Caltech in 2015 as a Moore Scholar.

Department of Zoology, University of Cambridge

Our research group is trying to understand how neural circuits process sensory information and transform it into behaviour. We have a particular focus on instinctive behaviours, which are strongly determined by genomic information that specifies the development and function of neural circuits. Our early work generated the first comprehensive description of circuit level differences in the fly brain; the large number of anatomical dimorphisms that we observed overturned the prevailing view that sex differences in behaviour originated from circuitry that was largely isomorphic. These maps suggested a large number of testable circuit hypotheses. We have tested one specific hypothesis for differential processing of the male pheromone 11-cis vaccenyl acetate (cVA). Electrophysiological and genetic investigation defined a novel circuit element, a bidirectional circuit switch in the brain, for the first time in any animal. This switch re-routes pheromone information between two target neuron populations and may underlie sex-specific behavioural response to pheromones. We have also developed new technologies in support of our scientific, including methods for ultra-rapid tissue labelling and computational tools to map and compare neuronal structures. Future work will dissect the developmental basis and behavioural significance of the sexually dimorphic switch we have identified. We will also follow the processing of non-pheromone odours with substantial innate odour significance. In addition, we will develop our studies of behavioural and neuronal integration of coincident positive stimuli (such as food and pheromone) and stimuli of opposite valence. Finally we will investigate the relationship between learned and innate odour responses.