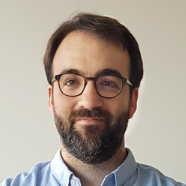 Following his graduate studies in Molecular Neurobiology at the Center of Molecular Biology Severo Ochoa (Madrid, Spain), Jaime joined in 2013 the lab of Dr. Timothy A. Ryan at Weill Cornell Medical College for his postdoc where he worked on developing novel tools to study the role of presynaptic organelles in synaptic transmission. In 2019 Jaime was recruited as independent Team Leader at the Paris Brain Institute (France), where he currently leads a laboratory focused on developing cutting-edge optical tools to better understand the molecular mechanisms controlling synaptic transmission. His research is supported by a European Research Council (ERC) Starting Grant, an ATIP-avenir grant (Inserm, CNRS, France) and the Diane Barrière Chair in Synaptic Bioenergetics (Paris Brain Institute, France).

The de Juan-Sanz lab aims to understand the molecular underpinnings controlling synaptic function to ultimately dissect how its dysregulation affects brain physiology and impacts human disease. We use and develop cutting-edge optical tools to examine diverse aspects of the biology of synapses, aiming to develop a detailed picture of the molecular mechanisms controlling synaptic transmission. Among these tools, we aim to design novel tools to precisely measure Ca2+ dynamics in neuronal organelles such as the endoplasmic reticulum, mitochondria or lysosomes. Another main axis of the lab is focused on understanding the role of metabolism and bioenergetics in supporting synaptic function, dissecting the molecular mechanisms that support and coordinate local energy expenditure and production to preserve the metabolic integrity of synapses. The overarching goal of the lab is to provide actionable knowledge that can be used to design better strategies for screening, prevention and treatment of human diseases. We collaborate with physicians at the Pitié-Salpêtrière Hospital to study human brain physiology and to increase our understanding on the synaptic molecular drivers of epilepsy and other neurological diseases.