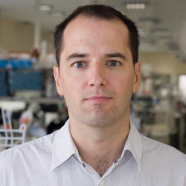 Jaime de la Rocha is a Junior Group Leader at the Institute for Biomedical Research August Pi i Sunyer (IDIBAPS) in Barcelona (Spain). He received his PhD in 2003 in Theoretical Physics in the University Autonoma of Madrid in the laboratory of Prof. Néstor Parga. After graduating, he obtained a postdoctoral fellowship from the Spanish government to work in the laboratory of Alex Reyes in the Center for Neural Science at New York University. There he performed in vitro experiments and computational modeling to investigate the transfer of synchrony in simple neural networks. In 2008 he moved to the Center for Molecular and Behavioral Neuroscience at Rutgers, where he worked in the lab of Ken Harris performing some in vivo population recordings and network modeling on the question of neuronal correlations and brain states. In 2010 he won a Ramón y Cajal position to start his lab in IDIBAPS in Barcelona where he combines behavioral experiments in rodents, electrophysiology, quantitative analysis and modeling to study the neural circuits dynamics underlying various cognitive functions such as perception and memory. In 2015 he became a permanent Junior Group Leader at IDIBAPS and won a consolidator grant from the European Research Council to investigate the mechanisms underlying expectations in perceptual decision making.

Our laboratory studies how the dynamics of cortical circuits composed of thousands of neurons can process information and give rise to cognitive functions such as perception, working memory and decision making. We are particularly interested in the circuit mechanisms underlying temporal integration of sensory information: from how subjects and circuits can accumulate evidence when faced with ambiguous stimuli, to how they can adapt to the environment statistics to generate perceptual expectations that bias their behavior. We are also interested in working memory and long-term memory and their interaction with perceptual decision making. To address these and other questions we use well-controlled behavioral experiments in rodents using high throughput set-ups. We are putting particular effort on designing and building an open source behavioral platform for automatic training that can reduce equipment costs and maximize the data throughput and reproducibility. We combine these behavioral experiments with electrophysiology to record the spiking activity from neural populations and with brain lesions, pharmacology or optogenetics to manipulate this activity and assess its impact on behavior. We use a wide range of analytical techniques ranging from statistical models of both behavior and neuronal activity to biologically inspired models of large cortical networks. Finally, we benefit from the biomedical environment at IDIBAPS and apply this methodology to understand the mechanisms underlying memory impairments characteristic of neural disorders such as anti-NMDAR encephalitis or schizophrenia.