Who we are > FENS-Kavli Scholars > PAVAN RAMDYA 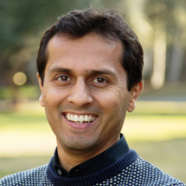 I’ve always wanted to understand how we make sense of the world, think, and act. As a child, I also imagined building robots that could do the same. I read science fiction, made drawings, and took appliances apart without ever really knowing how to put them back together again.

My real scientific training began when I was given the opportunity to characterize the properties of GIRK channels in the laboratory of Diomedes Logothetis as an undergraduate summer research fellow. One day, I was surprised to learn that recordings I had made the previous evening provided new insights into channel function. I became hooked on discovery and experimental science.

Afterwards, I began a PhD at Harvard University where I studied systems neuroscience with Florian Engert. By performing experiments on larval zebrafish visual circuits, I demonstrated how novel circuit functions could spontaneously emerge following neural circuit rewiring. This led me to wonder how variations in gene expression could drive the evolution of behavior through the reorganization of neural wiring and physiology.

I became convinced that this problem could best be addressed using Drosophila – with its breadth of genetic tools – as well as computational approaches that were being pioneered in evolutionary robotics. Therefore, as an HFSP postdoctoral fellow, I studied robotics and Drosophilaneurogenetics with Dario Floreano and Richard Benton in Switzerland, and later with Michael Dickinson at Caltech. In 2017, I moved back to Switzerland and started my own group at EPFL where we aim to discover control principles at the interface of neurobiology and robotics.

In my laboratory, we are fascinated by how seemingly simple animals achieve rather complex feats. A fly walking upside down on the ceiling, or boxing a sexual competitor may seem mundane until you try to imagine how you would build a 3 mm long robot to do the same. This is precisely our goal: to reverse-engineer living systems in order to understand how to construct similarly agile and flexible artificial systems.

Drosophila limb movements are the focus of our investigations. Limb movements form the basis for many ethologically important behaviors including locomotion, grooming, courtship, and aggression. These movements also vary across Drosophila species that have distinct courtship behaviors. Our working model is that the coordination and diversification of limb movements arise from phenomena ranging across scales from molecular gene expression, to neuronal population dynamics, and the biomechanical properties of the exoskeleton and muscle.

Untangling how these mechanisms orchestrate limb movements requires effective measurements, manipulations, and models. We design and use new imaging tools to record neural activity in behaving flies. We also develop computer vision algorithms to perform 3D limb tracking. Finally, we build neural network models and physics-based simulations to make experimental predictions. One test of how well we understand the language of limb control will be the extent to which we can synthesize novel limbed behaviors through targeted manipulations of neuronal gene expression.