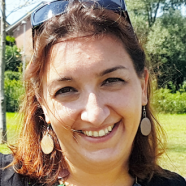 Simona Lodato received her M.S./B.S. in Biological Sciences from the University of Naples “Federico II”, Italy, in 2006, and her Ph.D. in Neurobiology from the European School of Molecular Medicine (SEMM) in 2011. During her doctoral studies, she investigated the molecular mechanisms that control the generation of inhibitory interneuron subtypes during the development of the cerebral cortex, under the supervision of Michèle Studer at the Telethon Institute of Genetics and Medicine (TIGEM). As a postdoctoral fellow in the laboratory of Paola Arlotta in the Department of Stem Cell and Regenerative Biology at Harvard University, she unveiled fundamental aspects of the molecular logic behind the acquisition of subtype specific projection neuron (PN) identity. She also discovered that the subtype-specific PN identity impacts the behavior of cortical INs, controlling the development of functional networks in the cerebral cortex. In December 2016, she has been elected member of the Next Generation Leader Advisory Council, a group of eighteen esteemed early-career scientists who act as scientific advisors for the Allen Institute for Brain Science in Seattle (WA), USA, where she will serve until 2019.

Since May 2017, Dr. Lodato is an Assistant Professor in the Department of Biomedical Sciences at Humanitas University in Milan, Italy.

Complex brain functions and critical behaviors such as movement planning and control as well as emotion processing and cognition are executed by highly sophisticated and stereotyped neural networks, which are composed by an outstanding array of distinct excitatory projection neuron (PN) and inhibitory interneuron (IN) subtypes that populate the cerebral cortex. My research interests are focused on understanding how genetic and environmental factors shape the wiring of the cerebral cortex. In particular, in our lab we aim at decoding the molecular strategies by which different types of PNs and INs properly acquire their distinct molecular and functional identity and coordinate their migratory behaviors to eventually assemble into distinct balanced microcircuits. Alterations in the excitatory/inhibitory balance during cortical development are often associated with numerous neuropsychiatric and neurodevelopmental disorders, like schizophrenia, epilepsy and autism spectrum disorders. In order to investigate the molecular and cellular events that govern the establishment and maintenance of specific cortical microcircuits during embryonic and postnatal development, in our lab we employ a variety of experimental approaches, including viral strategies for circuit tracing and functional manipulation, isolation and molecular characterization of genetically and functionally distinct PN and IN types – via single-cell genomics –, and in vivo gene editing, in both physiological and pathological conditions.