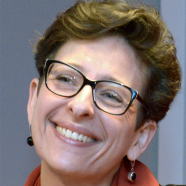 Born in Poland in 1977, Ewelina Knapska obtained MSc degrees in biology and psychology from the University of Warsaw. In 2001 she started working with Tomasz Werka and Leszek Kaczmarek, studying the heterogeneity of the amygdala in control of positive and negative emotions. After obtaining her PhD from the Nencki Institute of Experimental Biology PAS in 2006, Ewelina moved to Ann Arbor, USA for a postdoc in the laboratory of Prof. Stephen Maren at the University of Michigan.

She moved back to Poland in 2008, obtaining a stipend from the Foundation for Polish Science and becoming an assistant professor at the Nencki Institute of Experimental Biology PAS. In 2012, she obtained habilitation (DSc) and became an associate professor and the head of the newly created Laboratory of Neurobiology of Emotions. In 2016 she received a Starting Grant from the European Research Council for studying the role of the amygdala in control of socially transferred emotions.

Emotional contagion, i.e., the capacity to be affected by and/or share the emotional state of another individual, is considered to be the simplest form of empathy. We investigate neural representations of emotional states in interacting animals using behavioral models of socially transferred positive and negative emotions; the models have been designed in our laboratory. To understand how the systems underlying social communication operate we employ rat and mouse models, as well as neuronal tracing and optogenetic techniques. Using high-throughput behavioral measures of social interactions that we have developed (Eco-HAB system), we characterize neuronal circuits and cellular mechanisms underlying social interactions of mice living in social groups and validate tissue-specific therapeutic interventions using mouse models of synaptopathies relevant to autism spectrum disorders.