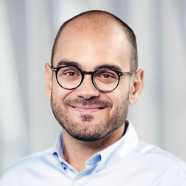 After obtaining an MSc in Biotechnology at “La Sapienza” in Rome, Flavio joined Pico Caroni´s laboratory for his PhD to study the neuronal underpinnings of learning and memory. Here, Flavio’s work revealed that principal neurons in the hippocampus segregate into genetically and structurally distinct subpopulations based on their birthdate, and give rise to parallel microcircuits by connecting preferentially with neurons with similar neurogenesis. Additionally, he revealed that parvalbumin-expressing interneurons regulate structural plasticity and learning in cortical microcircuits, through the establishment of transient network configurations that favor or prevent the acquisition of new information as a function of previous experience.

After defending his thesis summa cum laude, Flavio joined Edvard and May-Britt Moser in Trondheim to study the development of the neural correlates of space. Through his work Flavio elucidated the processes that lead to the maturation of the entorhinal-hippocampal network, by showing that stellate cells in the entorhinal cortex provide an activity-dependent signal that drives the maturation of the transverse hippocampal circuit. For this discovery, Flavio was awarded the Eppendorf & Science prize for neurobiology in 2017. Recently, Flavio has been using 2-photon calcium imaging in developing and adult animals to investigate the emergence of population dynamics supporting the production of a cognitive map in the mammalian brain.

Since 2019, Flavio leads his laboratory at the Biozentrum of the University of Basel, where he investigates the development of neuronal circuits and cognitive functions. Apart from science, Flavio is passionate about visual and performing arts, history, gastronomy, and cycling.

Biozentrum of the University of Basel, Basel, Switzerland

What cognitive tools is the infant mind equipped with? What drives the assembly of neuronal networks located many synapses away from the sensory organs, and how do these processes support the emergence of sophisticated cognitive functions during development? How can the brain of an infant animal, which is still largely under construction, extract information from its limited experience to create general knowledge about the world? These are the questions that drive our quest for understanding the fundamental principles that regulate the assembly and operations of neuronal circuits for higher cognitive functions. To tackle them, we rely on the generous support provided by a Starting Grant from the European Research Council and an Eccellenza Grant from the Swiss National Science Foundation, and use a vast array of cutting-edge techniques, like the ultrasound-guided injection of viral vectors for neuronal circuit tracing, calcium imaging, single-unit recordings, opto and chemogenetics, coupled to a quantitative approach for the study of mouse behavior and advanced computational approaches for the analysis of big datasets. In our experiments, we follow the activity of large populations of neurons longitudinally, from infancy to adulthood, while animals learn to associate multiple spatial and non-spatial stimuli to specific outcomes, or learn to navigate real or virtual environments to reach specific goals. By these means, we hope to understand how the infant brain acquires the ability to represent information about its experiences, and how such processes shape neural computations carried out during adulthood.