Who we are > FENS-Kavli Scholars > PANAYIOTA POIRAZI 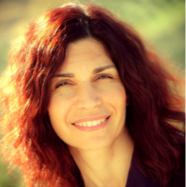 Panayiota Poirazi is a Director of Research and the Head of the Computational Biology Lab at the Institute of Molecular Biology and Biotechnology (IMBB) at the Foundation for Research and Technology-Hellas (FORTH), in Heraklion, Crete, Greece. She received her Bachelor in Mathematics with honors from the University of Cyprus in 1996. She received her Master and Ph.D. in Biomedical Engineering (Computational Neuroscience) also with honors in 1998 and 2000, respectively, from the University of Southern California in Los Angeles. From 2001-2004 she worked as a postdoctoral/Marie Curie fellow first in the Biomedical Science Research Center ‘Alexander Fleming’ in Athens, Greece (2001-2002) and then in the IMBB-FORTH (2002-2004), where she has been a Principal Investigator since 2004. She has made seminal contributions in the neuroscience field, regarding primarily the role of dendrites in learning and memory. She has received several awards for academic excellence, including the EMBO Young Investigator award in 2005, two Marie Curie fellowships (2002 and 2008), a Starting Grant from the European Research Council (ERC) in 2012 and the “Manolis Christofides” Young Cypriot Investigator award in 2014. She is a member of AcademiaNet: a European portal for outstanding women scientists since 2013 while in 2014 she represented the ERC at the World Economic Forum, Annual Meeting of the New Champions as one of the top 40 Young Scientists of the world.

Affiliation: Foundation for Research and Technology-Hellas (FORTH), Greece

FORTH, Institute of Molecular Biology and Biotechnology, Greece

Dr. Poirazi is interested in understanding how dendrites contribute to information processing and memory formation in the brain, via the use of theoretical and computational modeling approaches. Her work resulted in the first predictive models of how active dendrites and structural plasticity enhance storage capacity in single neurons, by transforming them into essentially two-layer neural network devices (Neuron 2001, 2003a,b). The first predictive model of spatio-temporal information coding at the single neuron level is another outcome of her work (PLoS Comp. Biol. 2010), challenging the traditional notion that information coding occurs at the network level. Several of these predictions were verified experimentally, leading to collaborations with top experimental labs. As part of these collaborations, she investigated the effects of stress on neuronal excitability in the amygdala (with M. Joëls, J. Neurophys. 2008) and the mechanisms underlying allocation of fear memories into neuronal assemblies (with A. Silva, Nat. Neurosc. 2009). Her work in the prefrontal cortex resulted in the first toy-circuit models of few cells that provide explanations regarding working memory deficits in NF1 individuals (PNAS, 2010) as well as predictive features for stimulus selectivity and UP/Down state transitions both at the single cell and network level (PLoS Comp. Biol. 2012, 2014). Currently her team develops single cell, microcircuit and large network models in several brain areas in search of a unifying function of dendrites in memory formation.